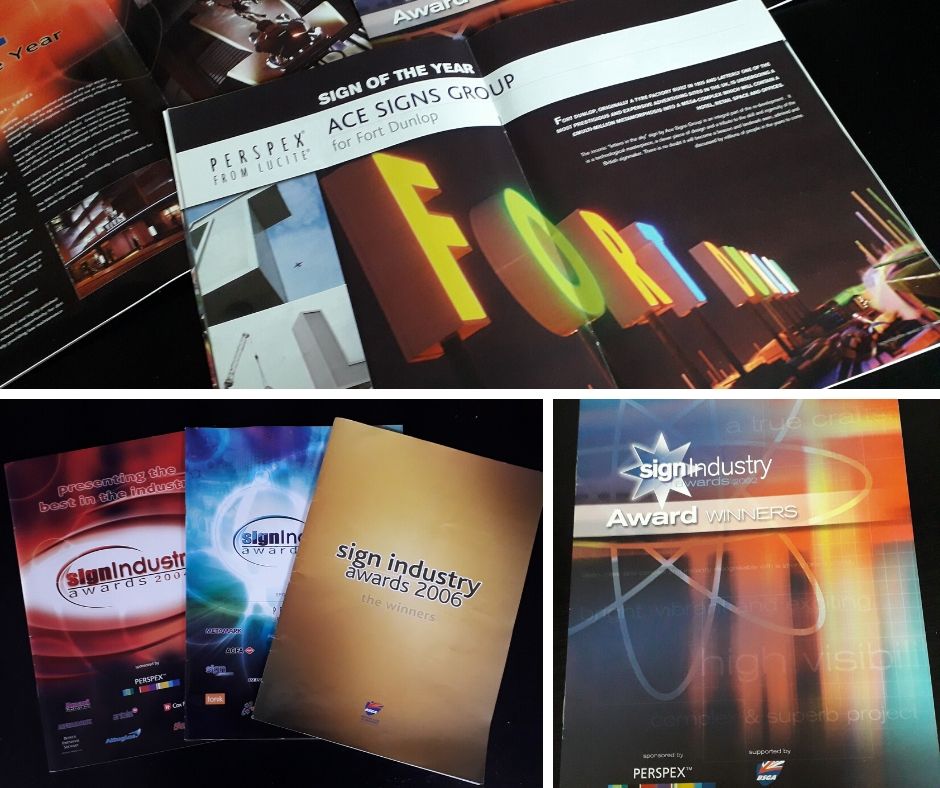 The ‘Oscars’of the UK sign industry have a history dating back to the 1990s, and for the past 20 years Ray Hirst has been the primary organiser of what are now firmly established as the British Sign Awards.

His first involvement  was as a marketing consultant to a company supplying acrylic sheet to the sign industry. As a member of what was then the BSA, the company decided to enter for the BSA Sign Design Awards and did so with a very cool project completed for Hilton Hotels..

The awards were presented at a BSA luncheon held at the Savoy Hotel in London and it was apparent from the pictures pinned to a board that there were hardly any entries.

“I had to leave the room for a short period and on my return less than five minutes later I found it was all over.  There was only one award and it had gone to Pearce Signs,” remembered Hirst.  “Evidently, the winner was simply announced from the top table, and Nick Pearce (then a member of the BSA council) collected the award and that was that.

“I had an involvement with award schemes in the commercial transport and horticultural sectors and both industries made much more of their awards, culminating in gala presentation and networking events.

“I could see no reason why the sign industry couldn’t do the same thing and told the BSA so.”

The response from Peter Tipton,  then Director of the BSA, was to the effect that if I thought I could do it better, then I should get on with it. So I did.

“With the invaluable help of Sign Directions magazine, we created a high profile scheme for the whole industry with clear entry procedures and proper, independent judging.

The first real Sign Industry Awards were launched in 2002.  Organised totally independently of the trade association, but with its logo displayed as a supporter of the awards, the whole thing was run on a shoe-string budget, but the awards were an immediate success and entries flowed in.  The first awards ‘show’ was staged in one of the lecture theatres at the Sign UK exhibition and attracted a full house.

For 2003, the same format was followed, ending with the presentation of multiple awards in a lecture theatre at the exhibition.

“By 2004 the awards were established and we had gained the confidence to move  to the next level,” said Hirst.

“We went out, found our first real sponsors, and booked our first proper venue – the Botanical Gardens in Birmingham – for the awards presentation.  The event took place in the evening on the middle day of the Sign UK exhibition and we played to a full house.”

“The Botanical Gardens was the perfect setting for the awards, but it was too small to accommodate all who wanted to attend, so in 2005 we moved to the Centennial Centre , also in Birmingham.  The following year the conference centre at Aston Villa Football Club played host to the awards.

“There was a break in 2007, but in 2008 the Awards bounced back with its biggest ever event, held at the Ricoh Arena in Coventry  and, for the first time, featured a ‘headline host’ in the form of TV political correspondent John Sergeant who, at the time, was carving out an alternative career as a dancer on ‘Strictly’.”

All the awards to this time were organised and run by Ray Hirst and his team, independent of any other organisation, although all did have nominal support from the trade association.

The economic climate after 2008 made it financially difficult for the awards to continue and they were put into cold storage until 2013 when Hirst judged the time to be right to resurrect them.

He approached what was then the BSGA with a proposal to re-launch the Awards under the association banner  but with a different format that would make them more accessible to more people and keep costs down for everyone.  Instead of an evening event, the proposal was to run the awards as a stand-alone daytime event in a central UK location, making it feasible for people from all over the country to get to, and home from, the event in a single day.

The BSGA agreed and the new British Sign Awards were launched.  Hirst and his team undertook to put in all the time and work needed to organise and run every aspect of the awards.

For their part, the association agreed, should the need arise, to underwrite any potential losses.  The fact is that the awards have always been self-financing and the association has never suffered any loss. The association’s only other involvement was to help with the recruitment of sponsors and help populate the judging panel.

The first new style British Sign Awards in 2014 returned to Aston Villa FC and the scheme and gala presentation event was an immediate success.  For 2015, the Awards moved to  Nottingham and the event was staged at the East Midlands Conference Centre on the campus of Nottingham University. It returned to the venue in 2016, when the host was broadcaster Bill Turnbull.

In 2017, the awards team decided a new venue was required and, almost by accident, came across the Athena in Leicester city centre.  Formerly a cinema, the art-deco style building had been converted to an events centre and its ambience and facilities seemed perfect for the awards.  The 2017 awards once again proved a success, and in 2018 the awards returned to the Athena when snooker champion Steve Davies was the very popular host.

2019 proved to be the best awards since the re-launch.  More entries than ever, more sponsors, a bigger audience, a new ‘oscar-style’ presentation show and the Athena specially decked out for the event.   To top it all off host Shaun Williamson (aka Barrie from Eastenders)  was a huge hit.

“We were delighted with the event and the full awards programme. All the feedback we received from both the sponsors and participants was positive and enthusiastic, with one minor exception, said Hirst. “The awards and the event were a brilliant reflection of the sign industry in the UK.”

“The awards that we have built and established over the past 20 years will continue and this year will return to the Athena.  Sadly our relationship with what has now become ISA-UK has come to an end.

“In some ways this offers an advantage to the Awards. Because the association logo sat on top of the awards, there has always been a perception amongst many that it was a scheme for its members only or that association members had an advantage.

“We actually managed the whole judging process and it was always scrupulously fair.  We carefully removed the identities of entrants before the judges saw the entries and the judges met round a table, under our stewardship,  to review, discuss and cast their votes.

“ Now as a totally independent scheme the we believe the British Sign Awards can appeal to a much broader cross-section of the industry.”

Awards presented at evening gala at the Botannical Gardens, Birmingham

2008 - Ricoh Arena is the setting for the biggest event to date.

Following a break because of the economic climate awards are relaunched under a new format in collaboration the the BSGA.

Organised by Ray Hirst and his team, the awards, in a new daytime format, return to AVFC.

Gala event staged at the East Midlands Conference Centre on the campus of Nottingham University.

The gala lunch and presentation ceremony returns to EMCC when broadcaster Bill Turnbull is the host.

The converted art-deco building in Leicester city centre provides the perfect setting for the presentation  of the awards.

The British Sign Awards return to the Athena when the host is snooker champion Steve Davies.

The 2019 Awards staged, once again, at the Athena, was rated the best yet by both participants and sponsors.  More entries, a bigger attendance and a truly memorable celebration of the skills of the UK sign industry.

The independent British Sign Awards will be back at the Athena for another memorable event.